How I Spent My Summer Staycation 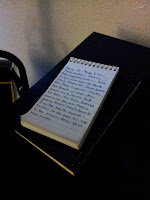 And so ends my week-long recess of reading and writing. I managed to crack that problematic writer's block that has had me in agony for the past year, discovered some new locales for upcoming scenes, tightened up some of the chapters that were already written, and wrote an entirely new chapter of a few thousand words. All in all, as the previous post mentioned, it was time well spent.

One of the most important things that came from this week was a mutual understanding of my writing process with my live-in girlfriend. She's incredibly caring and loving, giving me the time and space I needed this week to accomplish what I did. It's been difficult to have someone around all the time that you care about, but then intentionally ignore them to follow your own hobbies and interests. I suppose that was an issue of my own that needed come to light. She never implied that I was ignoring her and she has always been one of my biggest supporters; I just felt like I was being a bad boyfriend and a bad person.

Now that I understand that she does truly want me to continue on in my writing, I feel as though the handcuffs I placed around my own wrists have been unlocked. Combine that with my sense of accomplishment in having made significant progress and I feel renewed and restored. Rather than feeling defeated by my inabilities, I can see a light at the end of the tunnel.

This week I decided to reward myself with a much deserved vacation from my paying job. Instead of making myself more exhausted by trying to coordinate a trip with some convoluted itinerary, I will be using this time to nail down and rock out the rest of The Harbinger. Or at least make a serious dent, if nothing else.

The plan is to use the format that pushed me to completion on the first book. That is to say, locking myself in a room for extended periods of time with enough sustenance to keep the body functioning, but not enough outside influence to allow the mind to wander. Sustenance includes: coffee, alcohol, bass guitar, and a wide variety of musical influences.

We're about 250 more visits to hit that magical first 10,000 visitor count. As of my post "10,000 Strong and Growing" the counter was around 9,100. I'm grateful for the continued outpouring of interest. Nothing motivates a person more than seeing that the work they do is not going to waste. Don't forget you've got at least two gifts heading your way when it happens.
at 9:41 PM No comments:

Pardon the appearance. The dynamic view of the layout I had been using was hiding links and tabs from visitors on certain OS's and devices. In the meantime, please enjoy this entirely dull and basic layout.
at 10:33 AM No comments: