Getting Ahead of Myself

I couldn't sleep last night because I was having one of those unbidden brainstorm evenings.  It began with thinking about needing to get to work on The Seventh Horn and ideas for the prequel began to flood in.  Initially, The Harbinger was not only a totally separate story, but it was told from a totally different point of view.  I was struck with the notion to flip the roles of the heroes and villains of the story and the biblical references in my mind just exploded in response.
If you don't know me well enough yet - I spent 10 years in a Christian school.  I am now armed with enough theological information to be sufficiently sacrilegious at great length.  Sure, I've taken creative liberties in order to make these stories, but it amuses me how much bible-speak I've managed to tie in.  Dan Brown did it in The Da Vinci Code and everyone wanted to crucify him.  Imagine that, but without the pretentiousness and a lot of swearing instead.  Oh, and vampires.  Maybe it's more like an elongated, uncensored episode of Supernatural.  Whatever.
Anyway, after I managed to entertain myself with my new premise, more kept pouring in and I ended up with at least 10 more ideas for short stories.  It's slightly annoying that I did so because I'm in the middle of writing two and have another 12 lined up even before getting to the ones that popped up yesterday.  It's never a bad thing to have too many ideas, I guess.  I'm eager to write something anything, but The Flying Spaghetti Monster answered my prayers and I don't have enough time to do so right now.  Gotta work, gotta earn money, gotta edit, gotta sleep, gotta live.
at 12:46 AM 1 comment:

Tomorrow I go back to work.  Nothing too fancy, but it'll pay the bills.  Combine that with the occasional renderings I do as a side job and I should actually be pretty busy for a little while.  Which is a good thing because I was losing my mind for a while there.  Insomnia, cabin fever, poverty and celibacy adds up to a pretty lethal dose of depression.  Luckily, the employment should steamroll right over those issues one after another.  I did manage to write the entire book while working in retail during the holidays, so this new job should push me to actually do something.
I'm now also trying to get back to working on edits for The Seventh Horn after this month of mental paralysis.  I've mostly got the proofreading finished and the right wording down on paper.  It just needs to be transfered to the document, altered to the correct file format, uploaded to the sites, and published.
Once again, my perfectionism and self-defeatism have reared their ugly heads and I now hate everything I've written.  It's been too long since November and the joy of writing the thing has since left me.  It is my first attempt at a full-length (sorta) novel and I did write the damned thing in a month, so I guess I shouldn't expect too much from it.  But it's not fun now, I just want to toss the whole thing and do something else.  I won't of course, because I had to go and tell people that I did it and then spent money getting cover art for it.  Ah well.  I enjoyed writing it and maybe you'll get a chuckle or two out of Ark and a disgusted face or three at the amount of times I felt it necessary to swear throughout the story.  I could spend another few months worrying about the exact wording of every little thing, but ya know what?  It's supposed to be fun.  So screw it.
If I miraculously manage to dedicate myself to completing everything, you should find the book up for sale on Barnes & Noble for the Nook and Amazon.com for Kindle right around April 15.  If you don't have an e-reader and don't feel inclined to read tens of thousands of words on your computer, I'll try to figure out something out with paperback publishing perhaps.
at 8:12 PM No comments:

Email ThisBlogThis!Share to TwitterShare to FacebookShare to Pinterest
Topics: the seventh horn, writing

The Last Time & Stranger Than Fiction 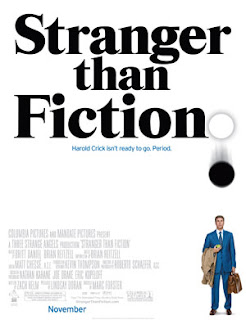 I wrote a short story this morning called The Last Time.  I felt pretty good about it until my reader didn't really get what I was going for at all.  I guess I try to attempt new things every time I write and so I may hit some speed bumps here and there, but I was somewhat disappointed by the reaction I got from this one.  It's written in the first person which is one of the many unusual things I tried with this story.  Oh well.  I enjoyed writing it and maybe someday others will enjoy reading it.
Yesterday I watched the movie Stranger Than Fiction (free as a PS3 download, fyi) which has given me reason to regret the numerous ways I've killed or plan to kill characters in my stories.  Upon thinking about it, I realized that I kill someone in each and every story that I write.  Whether that means I'm trying to work through my own personal issues or whether it means I'm a little bit crazy has yet to be determined, I suppose.  At any rate, it's not as if I imagine my characters to be real and walking around the Earth as they are subjected to my sadistic whims.  It simply means I have a different perspective on my inventions.  I casually discard my characters whenever I feel like it simply because they belong to me.
Let me take a step back for a second.  Stranger Than Fiction starring Will Ferrell (and that girl from The Dark Knight who I don't care enough about to look up) is about a really boring IRS agent who falls in love.  At some point he starts to hear the narration of his life and begins to realize that he is a character in a story and that the author plans to kill him off in the very near future.  He doesn't want to die and very little comedy ensues, considering it's a Will Ferrell movie.  I'm not saying it's a bad movie, it's simply not a punch-you-in-the-face comedy like every other one of his films.
I was discussing part of this concept with a friend of mine and she wrote it off as "death is a natural part of life and is therefore integral to everyone's story."  Maybe that's true, but to me that sounds like a load of crap.  Death isn't a necessary or even an important part of all of the plotlines.  I just manage to kill a character every time I write.  A bank robbery gone wrong, a self-inflicted gunshot to the head, a vampire bite, drowning, leaping off a rooftop, and armageddon are just some of the ways I've destroyed my own creations.  I had never thought twice about it before watching this movie, but I have a new appreciation for an imagined reality now that I've seen it.

In conclusion, I've killed yet another character.  Ironically, this time it seems that I killed them without point or purpose since my reader didn't even enjoy it.  Back to the drawing board - or typewriter - or laptop.  However you want to look at it.
at 12:16 AM No comments:

...who knows that it would be more comfortable to sit on my person than the cold, dusty floor.  So I am left with no choice but to run around like an idiot as I try to avoid its enormous ass as it tries to crush me or I can attempt to hide in a secluded second-story room where I know the elephant cannot possibly follow me.  After all, how would an elephant climb the stairs to get up there let alone fit its wide load in the front door?
That's right.  It's 3AM and sleep is nowhere in sight.  Sure, I can lie here and stare at the ceiling and listen to the clock as it tolls away the hours - but what fun is that?  I'm supposed to be writing 1,000 words or so per day to keep the mental tools sharpened, but I've been seriously lagging behind on that front as of late.  I'm depressed and there's no use denying it.  I can't sleep, I don't want to eat, and I don't particularly care to do much of anything.  It's even less fun than it sounds, let me tell you.  At any rate, I'm supposed to be heading over the river and through the woods (or city) to the Philadelphia Museum of Art in a matter of hours, so I will now resume burying my face in a nearby pillow in a feeble attempt to get some sleep before that happens.  G'night - or Good Mornin' depending on your reference point.
at 3:09 AM No comments: